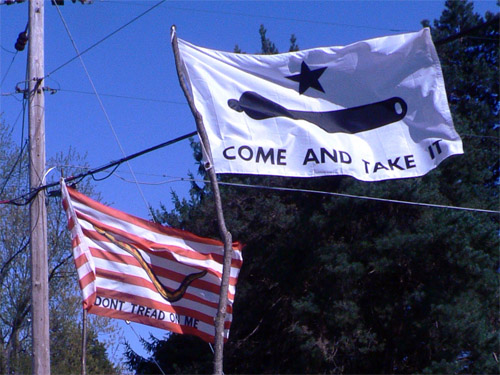 So, the Johnson County Board of Supervisors wants to widen Newport Road, which connects Prairie Du Chien Road to Highway One, just outside Iowa City. The people who live on that road oppose the road project because it would ruin the character of that part of the county, which mixes homes on acreages with working farms. The County would have to spend millions on the project, the people who live there who don't want it, so the only people I think will benefit are a few developers who want to get rich increasing sprawl.

Some of the people who live along Newport are quite well off, including the University of Iowa football coach Kirk Ferenz, whose spread is pretty damn Hollywood. But they're right to want to keep their corner of the world from becoming just another cookie cutter neighborhood. What got to me is how they've chosen to exercise their dissatisfaction with the County. They've put up dozens of flags, mostly the First US Navy Jack, with the Snake and the motto "Don't Tread On Me." Along with that are flags that have a cannon and the motto "Come And Take It," and "Don't Give Up The Ship." They've appropriated Revolutionary War political symbols, symbols of open rebellion from the government, in their fight to preserve their road.

This may seem like a silly local issue, but any time Americans organize to tell the government to get fucked I think it's a good thing. Thomas Jefferson said "A little revolution now and then is a good thing; the tree of liberty must be refreshed from time to time with the blood of patriots and tyrants." I think in the case of road widening, we can dispense with the literal shedding of blood over the issue. But the idea of rebellion and revolution as essential parts of American Democracy is one of the most dangerous, and therefore one of the best ideas we've had as a country. Even if it's about curbs, it's nice to know it hasn't been forgotten.
( Collapse )
Collapse