How blindingly stupid is the American populace? A memo went out, and every time a Republican opens his mouth, out comes 'cut and run.'

What would be the corresponding Democratic catch phrase? I think "Start a war, under false pretenses, and then fail through incompetence, arrogance, corruption and greed" doesn't have the same snappy appeal. 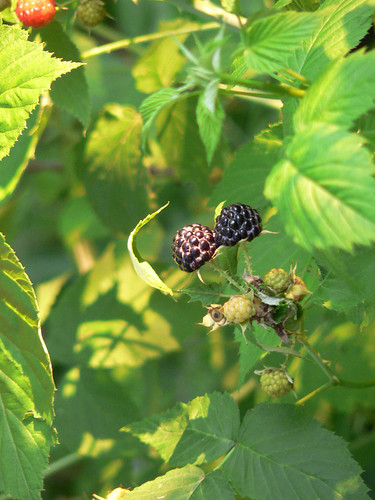 This year, the blackberries are taking over in the woods behind our house. They're everywhere. Here's one evening's load: 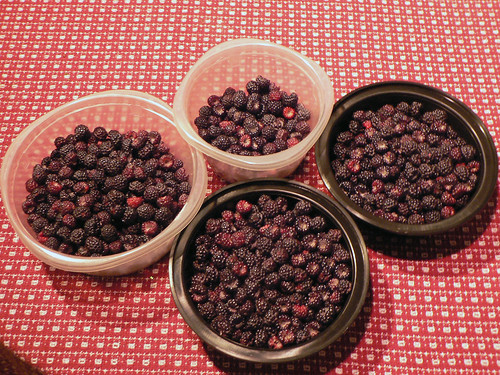 And the berries aren't even peaking -- I expect a week of pulling out at least a quart every day. We'll end up with a couple of GALLONS to make jam with. And the number of new canes coming up is insane -- it will be twice as big next year.

I'm covered with little random outbreaks of poison ivy. We try and shower it off but it seems like it can't be denied. As much as I've been crashing around in the woods, it's a wonder I don't have more.

Back 'in the day' Liz Phair came out with the CD "Exile In Guyville" which all right-thinking indie-heads (like myself) snapped up immediately, just ahead of the inevitable backlash. No less than Steve Albini dissed her, and once Albini disses you, you've arrived.

As it turns out -- to my mind anyway -- the backlash was mostly deserved. The qualities of 'Guyville' that made it appealing -- her deadpan voice, the low-fi, yet effective production -- weren't ultimately going to make up for the lack of real depth in her songwriting. Her subsequent work has been pretty tepid, and here dependency on 'collaborators' like Dan Penn and the Matrix makes you suspect that "Guyville" may have owed it's appeal more to the work of her producer than to anything she did. Even though she started out on Matador, back when Matador was still a reall indie label, the label and her publicist even then were marketing her as a cute girl who talks dirty. From that beginning, then, to the unabashed marketing of her MILF-appeal on the cover of her 2003 self-titled album, Phair was always an image-driven product. Even her bohemian indie-ness may have been a manufactured thing -- even as articles stated she sold her drawings on the street for money in her early days, they were burying the fact that she came from a very affluent family.

It's too bad, too, because if my narrative above has any truth to it, then Phair played into the worst anti-feminist cliche' about women artists, that they're nothing without a man to manage and package them.

But that one song, "Stratford On Guy" still blows me away. I wasn't able to find an MP3 on line (except this cover by Self), so you'll have to find it yourself on iTunes or whatever. The combination of the lyrics' cool specificity in describing a moment on a landing plane, and the chord progression's turns and twists made it a very nearly perfect Pop/Art song. She gets extra indie points for the line "And I was pretending that I was in a Galaxie 500 video."

The most fascinating thing about looking around for stuff on this song is the contrast between the 'Girlysound' version (Phair's self released cassettes), which has a much less focused lyric, which ends on this disturbing note:

Imagine a time -- 1993 -- when you could write a song in first person about blowing up an airplane. It's obvious in the way that Phair (or one of her Svengalis) pruned back and refined the lyrics between Girlysound and Guyville, losing the terrorist angle in the process.

But despite the disappointment Phair has been in the last 13 years, I have to give her "Stratford-On-Guy" as her one perfectly formed song. It's one more than most of humanity has managed.
Collapse