I've liked Obama all along, but the speech he gave today was a barn-burner. He hit all the high points of the Democratic Agenda, but with such apparent passion and feeling, that you wouldn't know his speech was made up of bits and pieces he's said a hundred times already. He really has what it takes to connect with an audience, and of course, Iowa City is the audience liberal Democrats have wet dreams about.

I don't know if he'll make a good president, a great president, or a noble failure of a president (like Carter, who I also saw speak this week), but at this point a potted fern would be better than the President we have now. I've not seen Hillary Clinton yet, but I've seen a lot of her on TV and Youtube, and frankly, compared with Obama, she comes off as insincere and grasping. And Edwards is a good guy as well, but in Iowa, where a lot of the people who go to the caucuses base their choice on seeing the candidate in person, Obama is the one who makes the connection. It's hard to see in my pictures but there were at least 3000 people there to see him speak. Nine months before the Caucus, that's a huge crowd. 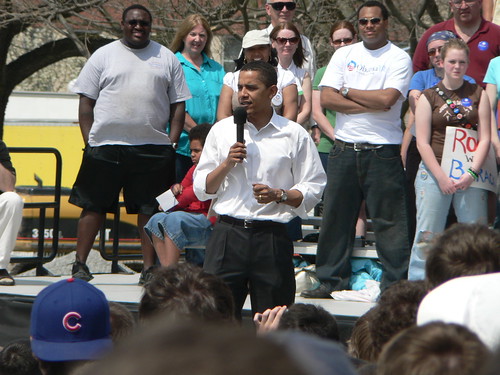 My son Sean (who helped his friend and former room mate Chris found the U of I Students for Obama) found an image that gives a better idea of the magnitude of the event:

Click through to the full-sized image. There are about 80,000 people in the Iowa City/Coralville area and at least 5,000 people were there for Obama.
Collapse