What Musharraf is doing is indefensible, and yet according to NPR this morning the response from the Bush Administration is 'tepid,' and senior officials in the State Department said there's an ongoing debate over whether a democracy or military rule are going to better serve the US's best interests. Condi Rice's version of RealPolitik is pure Dr. Strangelove.

Just ONCE I'd like to feel like the government of my country made a decision based on the ideals we ostensibly hold. Why can Pervez Musharraf play the current administration like a piano? For that matter, why is our entire foreign policy being dictated by the vanishingly small group of nutballs behind terrorist attacks? It seems as though the US goes out of its way to be exactly the sort of Great Satan that the extremists say we are.

I really do love the US, and democracy, and the American people. I'm just sick and tired of the way our government talks American ideals as a way to justify so many things that are in direct opposition to those ideals.

There was a book avalanche in my studio, so I'm scanning a few covers.

I wonder what was wrong with the original title "Star Man's Son."

I think "Ambigously Gay Post-Apocalyptic Raft Guy" would be a better title. 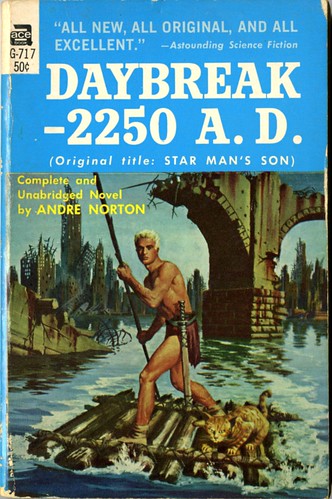 The 50s were the golden age of lurid paperback covers. The 60s were dour, and then embarrassingly psychedelic. The 80s were... eeecccch. This is an 1983 reprint of the 1964 original, and for some reason the cover artist thought Palmer Eldritch needed batwings and a Mormon missionary suit to complete his ensemble. 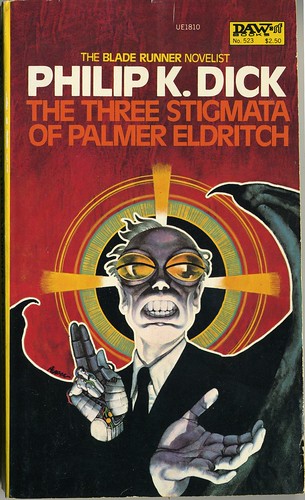