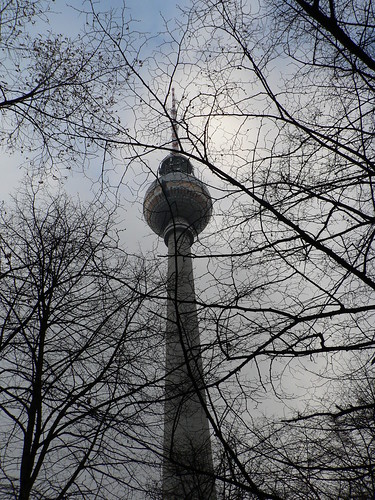 I had a good time, ate some good food, saw PanSonic & Apparat & Ricardo Villalobos & DJ Pierre. I went to Dresden and Potsdam. I was cursed out by a German girl in the hostel for snoring. I drank a lot of beer. I hung out with Stewart Walker. I went to Flea Markets. I went to the Pergamon Museum. I admired the inhuman shittiness of East German Architecture. I walked through the Brandenburg Gate at 3 AM. I spent a lot of time chatting with the erudite women who worked the desk at the hostel. Seriously -- between the three I got to know fairly well, there were 4 or 5 advanced degrees. I ran out of clean clothes 3 days too soon. I spent a bunch of money, mostly on food and beer. I went to Hardwax.

It was remarkable how little of the Communist past was apparent in the places I visited. Or, further back, the insane carnage visited on Dresden in 1944. Aside from the delicious crapulence of DDR architecture, the best place to experience the former East is at the flea market, where it's sold off as ironic kitsch. The one thing Berliners apparently felt strongly about preserving was the figures in the Walk/Don't Walk signs -- instead of replacing the East German pedestrian signals, they replaced the West German ones. There are shops devoted to that little guy. 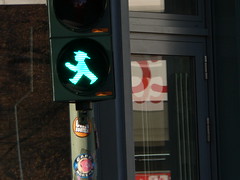 I realized that as much as I anticipated visiting someplace new, that just being someplace different didn't mean as much to me as I once thought. Berlin is great, and experience its shabby, relaxed streets was fun, but really, the whole world is available to me at home, for cheaper. I am glad I went, and I'm glad to be back. The best part of the trip was the people, but people are everywhere. And there's a certain impenetrable film of cultural preconception that is difficult to get through.

You get a different viewpoint on the USA overseas, but mostly I felt like it just confirmed the estrangement I feel towards my country even when I'm in the middle of it. Reading German papers every morning, it was remarkable to me how minor the travails of the US are to Germans. The LocFuehrer's strike (Locomotive Engineers) and Berlin's perennial bankruptcy loomed way larger than the US Election or Iraq.

Anyway, I felt a bit homesick in Berlin in a way I haven't felt on trips before. I still want to visit new places and see new things, but I also appreciate even more the web of social connections I live in. Sometimes you don't see that for what it is until you put yourself somewhere where you're cut off.
Collapse