Hillary Is A Monster

The resulting kerfuffle is interesting. Obama disowned the remarks, Clinton called for Samantha Power's resignation from the Obama campaign. But didn't she just blurt out what everyone was thinking anyway?

I don't think Hillary is a monster in every circumstance -- get her alone and have a cup of coffee, I'm sure she is as nice a person you could expect to find in politics. But Hillary, the candidate, is indeed a total fucking monster. She and Bill will stop at nothing to win ugly.

And I don't think I'm just being an Obama partisan on this. Case in point is the whole Canada/NAFTA business: right before the primary in Ohio, a story came out about an Obama aide telling Canadian officials that his criticism of NAFTA was just campaign rhetoric. Turns out that the aide in question denies saying anything of the sort, and the Canadian government corroborates that. Then it turns out someone in the Clinton Campaign did exactly what Obama's campaign was accused of doing.

I.E. the Clinton campaign has very little in the way of principles -- they will do whatever they can to tear Obama down, because for them winning is everything. It would be more honest if they just hired people to shoot at him -- instead they distort his position and records in weaselly political-speak, and act like they're not being the amoral hacks they so obviously are.

While we're on the subject of obscure local bands I am a huge fan of, here's LWA's set from the other night. They added a guy playing electronic drums with transducers inside cottage cheese tubs, and I think it's fairly brilliant.

You know, brilliant in that way that when I say it, people back away slowly.

That thing that Matt (on the right) is playing is a Beltone Audiometer -- a test tone generator for hearing tests. 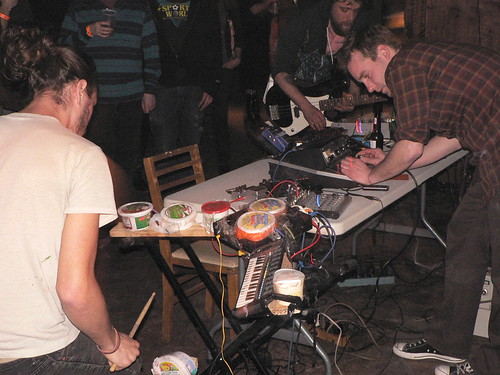