As Greg Davis pointed out to me last night, making music with just sine tones isn’t an original idea. But for me, the simple setup of 4 sine wave synths in Ableton Live, set up such that I could jam out live felt really good. In the context of live music in 2010 I’d have to say I heard a lot more raw sawtooths and white noise than sine waves. The purity of sine tones is seductive to me. Sines are a mathematic abstraction, a Platonic ideal, that you can perceive with your senses.

I originally was going to record the set in Live –i.e. record MIDI and fader actions, but instead I captured the performance along with room sound using my Zoom H4. Not to get all po-mo, but the people blabbing, cracking open beers, the dodgy PA, and even the sound of ventilation system give what I did a texture the ‘pure’ recording would never have had. There’s a moment about 3 minutes in that I love, where my friend John Schlotfelt shushed the audience. Apparently a fair number of people hadn’t recognized that a performance had begun. That I was cross-legged on the floor, facing the wall, might have had something to do that, but honestly, it would have been just fine with me if they’d carried on chatting all the way through. 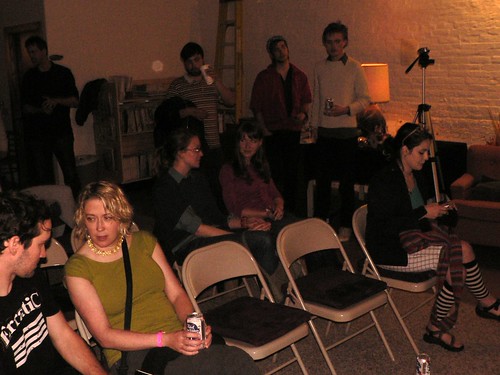 Originally published at Do My Eyes Look Scary?. You can comment here or there.